This installation was performed using VMware workstation, however the principles are similar for a physical server. Using a Virtual Machine allows the rapid creation of virtual components such as disks and NICs and is therefore well suited to a tutorial.

FreeNAS is an excellent implementation of a robust file sharing system. It is available from iXsystems or directly from www.freeNAS.org

In this tutorial Version 8.2 was used 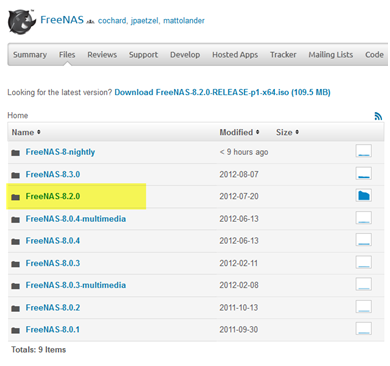 Here the 64 bit version is used 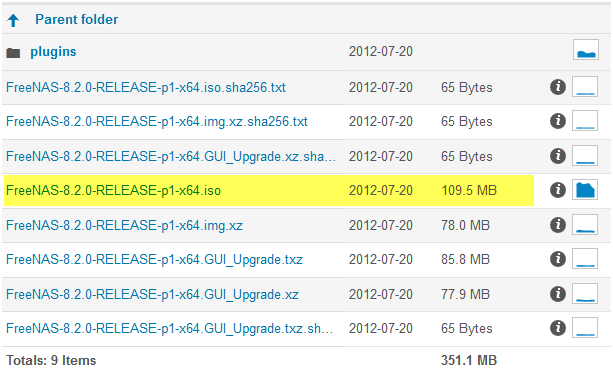 Burn the ISO image to a CD and boot from the CD, The installer should bring you to the following screen.

Select a location for the FreeNAS installation and select <OK>. 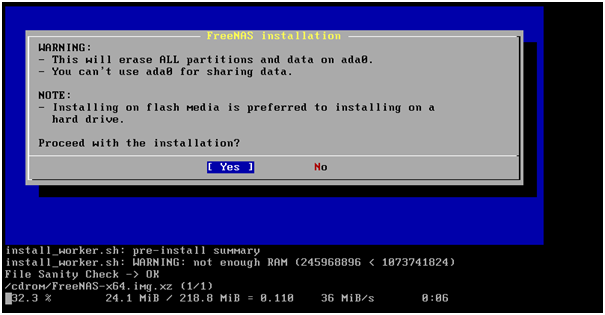 The system should reboot and display the menu below:

Accept the default option and proceed to the Console setup screen: 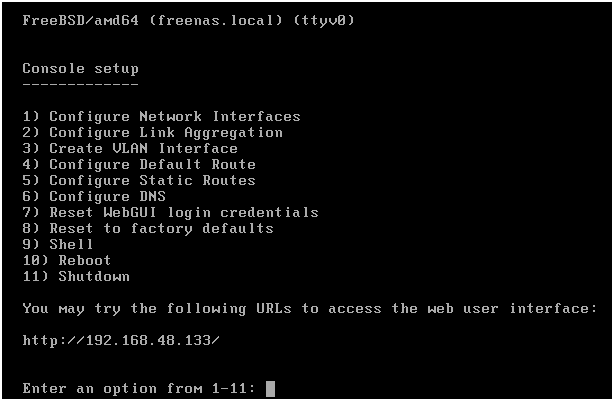 The console presents minimal configuration options. At this stage it should be possible to log in from a browser enabled client. Point the browser to the IP address displayed (192.168.48.133). 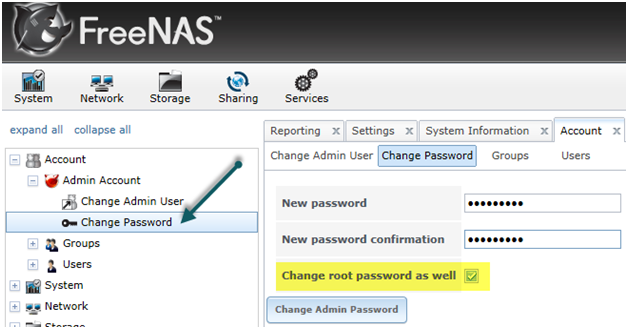 The machine has two smaller SCSI emulated disks of 10 GB capacity each and they will be used to create a volume on which to house the shared NAS files. Under <Storage> select <Volumes> à <View Disks>.

Edit the parameters (since these are actually virtual disks there is no benefit in enabling power management. Give the disk a descriptive name and select <OK>. Repeat for the second disk. 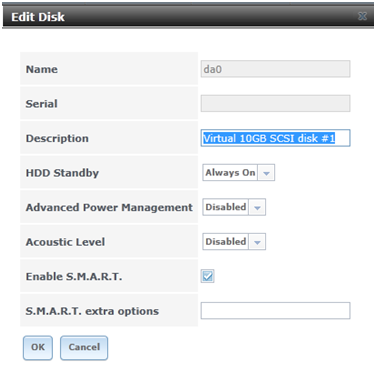 From the <Volume> branch select <Volume Manager>. In this case the two disks will be set up using the ZFS file system. Select both disks, then select the Filesystem type as <ZFS> and the Group type as <Mirror>.

The volume is now shown as <Active>. 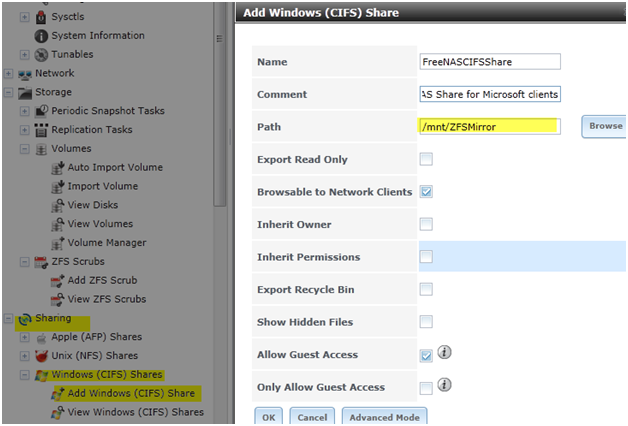 The path must be specified in the dialogue and this is obtained from the previous screen (View Volumes) which shows the mountpoint. Enable the service at the prompt.

After this the share should be accessible to CIFS clients – 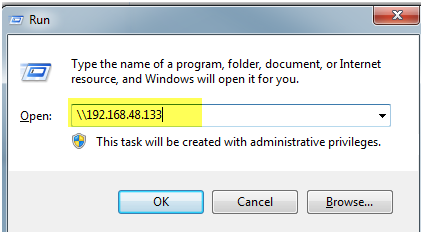 Now that the share is accessible, the permissions can be set to allow for write access. This can be done by going to <Volumes> à <View Volumes> and selecting the <Change Permissions> icon .

Note: Understanding permissions is key to file sharing. UNIX and windows behave differently in how permissions are administered and separate volumes should be created for each type of file share. FreeNAS supports Apple, NFS and Windows shares.

The <Change permissions> dialogue shows a matrix grid allowing a Windows or UNIX ACL to be set up for different groups and users. THE ACLs are mutually exclusive and that is why a radio button control is presented. After setting the permissions check to see if files are read/writable to the share from a windows client. 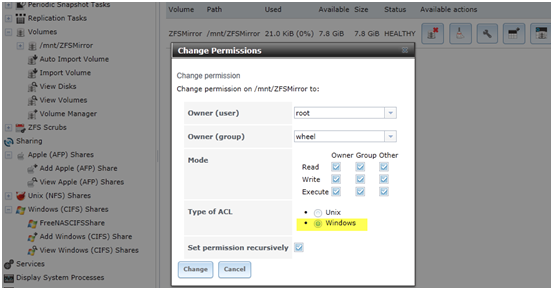 If new disks are added to FreeNAS, then their capacity can be used to extend a volume – here a third 10GB disk has been added. 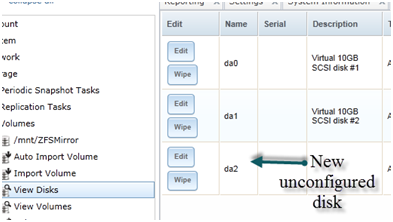 This disk is not part of a volume and its capacity is available. To add the volume to an existing volume select the volume name (here ZFSMirror) from the drop down box, highlight disk da2 and then select <Add Volume> 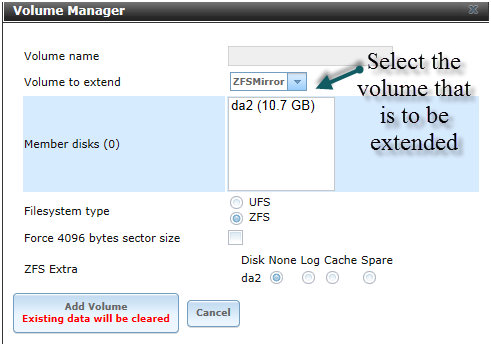 Volumes can be removed by selecting the <Detach Volume> icon. 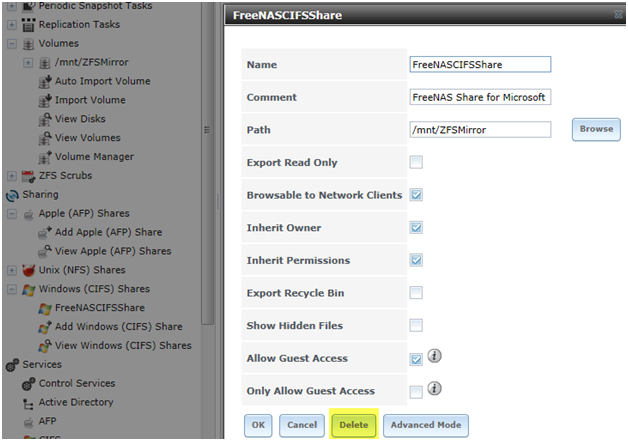 If the user inadvertently forgets this step FreeNAS is aware that the volume is part of a share and will issue a warning accordingly. So to delete a volume the “lazy” way select <detach> as shown above and then acknowledge the warning. Here the<Delete all shares> option has been checked. In addition a data destructive option is checked in order to put the disks into a clean state. Select <Yes> to destroy the volume. 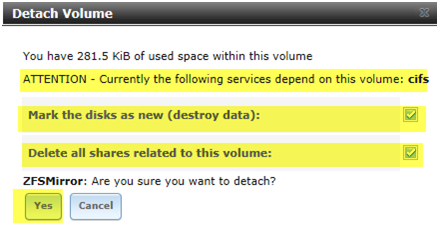 The Volume Manager now shows that no volumes exist.

To further demonstrate the capabilities of ZFS a four drive RAID-Z volume will be created. This option was not available to us earlier since there were only two drives available and two drives can only be used in a striped or mirrored configuration. Select the volume Manager as before, highlight all drives and check ZFS and RAID-Z. 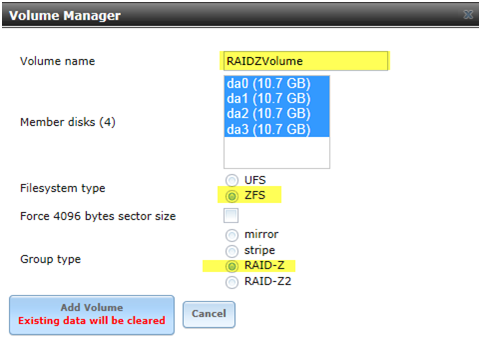 The new volume was named RAIDZVolume and now shows up with a capacity of 23.4 GiB. RAID-Z makes better use of redundancy in that more capacity is available and it can tolerate a failure of any single disk.

Note if RAID-Z2 was used fault tolerance is improved at the expense of capacity. As a general rule of thumb, single disk fault tolerance should be adequate for up to 5 disks, after this consider using multi-drive fault tolerance. In addition large capacity disks can take a long time to rebuild so a volume is no longer protected with RAID-Z or mirrored redundancy schemes.

NAS is a file level protocol, however FreeNAS also supports block oriented protocols such as iSCSI. To start first of select <services> à <iSCSI> à <Portals> à <Add Portal>. From the drop down select 0.0.0.0 and use the standard iSCSI port of 3260. 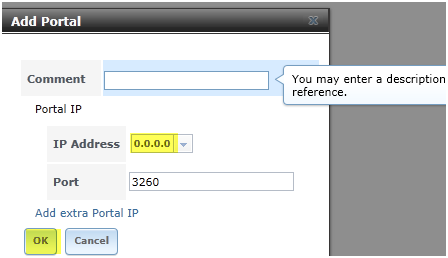 The next stage is to set up an initiator. The SCSI protocol uses the concept of Initiator/Target where the initiator will typically initiate a data transfer to or form a target. This could be a read or write operation. Initially all initiators will be allowed. Select <iSCSI> à <Initiators> à <Add Initiator>. 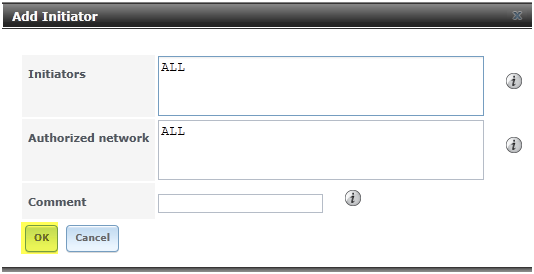 The next part is to add an Extent, do this be selecting <iSCSI> à <Extents> à <Add Extent>. 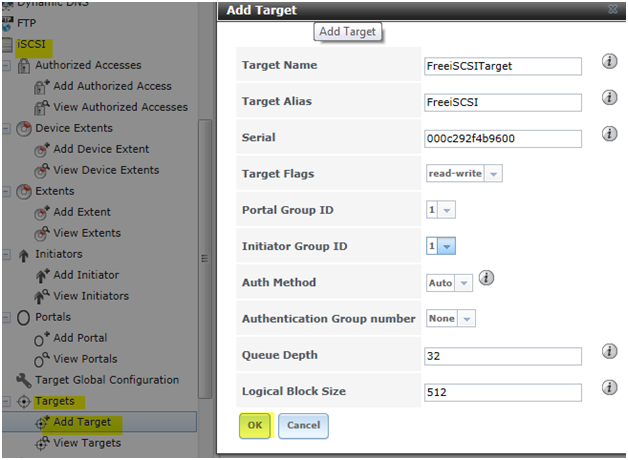 The next stage is to associate the extent that we created with the newly created target. With the iSCSI target selected, choose <Associated Targets>.

Select <Add Extent to Target> and then select the target and the extent from the drop down box. Select <OK> 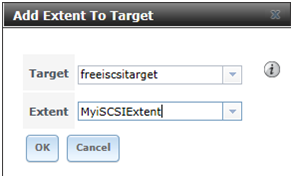 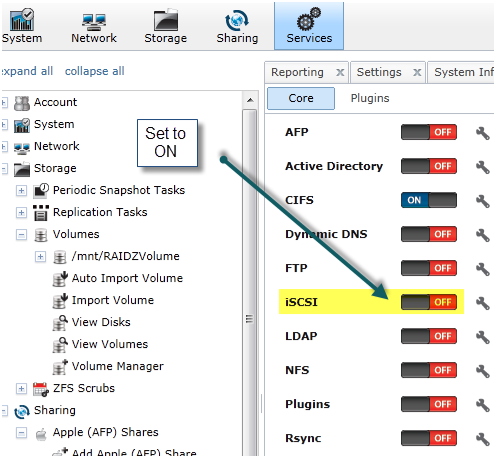 Setting up the iSCSI initiator

In this example the Microsoft iSCSI initiator will be used to connect to the target, Enter the IP address of the FreeNAS server into the Target field in the iSCSI initiator dialogue and then select <Quick Connect>. 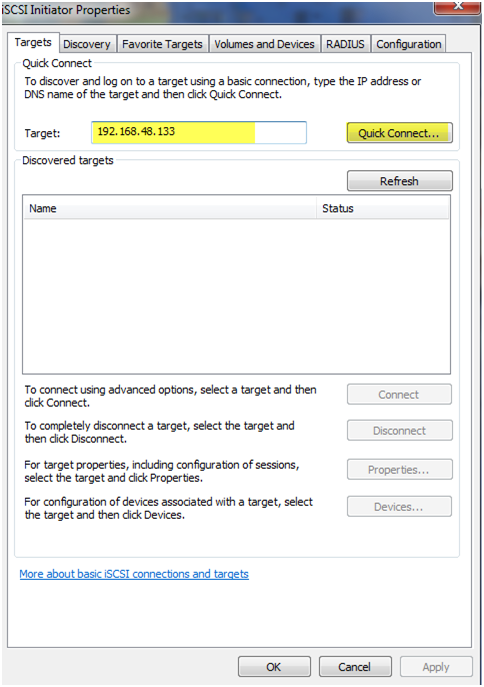 When the target appears in the <Discovered Targets> box, select , <Connect> to take it out of the <Inactive> state. 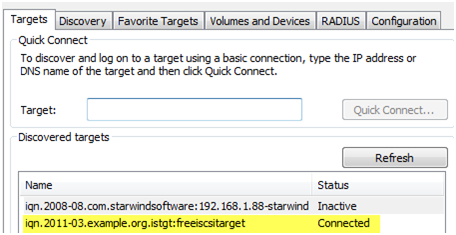 Since iSCSI is a block protocol, the disk will require formatting and partitioning just like a regular disk. 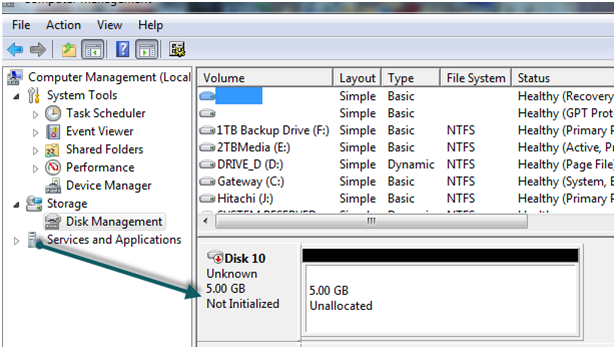 After this operation the iSCSI target is now ready for use.